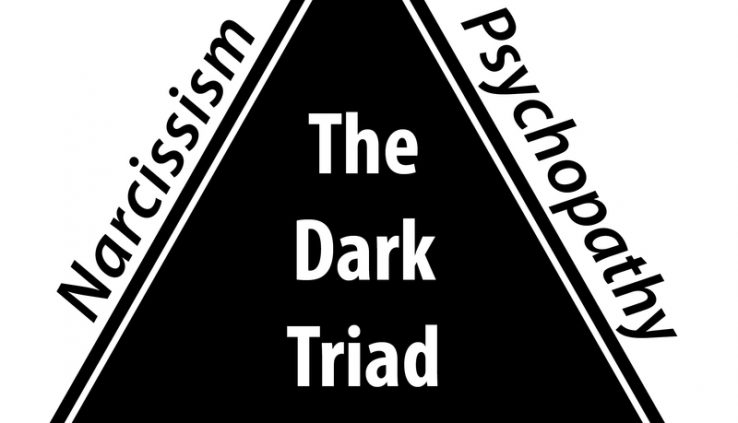 A dirty dozen test to detect narcissism, Machiavellianism, and psychopathy

Lurking beneath the surface of people who use others to their own advantage is psychology’s “Dark Triad.” Defined as a set of traits that include the tendency to seek admiration and special treatment (otherwise known as narcissism), to be callous and insensitive (psychopathy) and to manipulate others (Machiavellianism), the Dark Triad is rapidly becoming a new focus of personality psychology.

Researchers are finding that the Dark Triad underlies a host of undesirable behaviors including aggressiveness, sexual opportunism, and impulsivity.  Until recently, the only way to capture the Dark Triad in the lab was to administer lengthy tests measuring each personality trait separately.  With the development of the “Dirty Dozen” scale, however, psychologists Peter Jonason and Gregory Webster (2010) are now making it possible to spot these potentially troublesome traits with a simple 12-item rating scale.

The technical definition of the Dark Triad, as stated in Jonason and Webster’s article, is rather daunting: “the Dark Triad as a whole can be thought of as a short-term, agentic, exploitative social strategy…” (p. 420).  This means, in simpler terms, that people who show these qualities are trying to get away with acting out against others in order to achieve their own ends.  Each of the individual qualities alone can make life difficult for those who know people like this. Combined, the Dark Triad traits in another person close to you can be detrimental to your mental health.

People who score high on the traditional Dark Triad measures that test each of the three qualities separately show a pattern of behavior that in fact combines the worst of all worlds. They seek out multiple, casual sexpartners. When someone gets in their way, they act out aggressively to take what they want. Oddly enough, although their self-esteem doesn’t seem to be either higher or lower than others, people who score high on the Dark Triad qualities have an unstable view of themselves. Perhaps reflecting the aggressiveness inherent in the Dark Triad, these tendencies are more likely to be shown by men, particularly those who are high on psychopathy and Machiavellianism.

Psychologists are just beginning to discover the darkest sides of the Dark Triad, and there will certainly be more that we learn about the problems they create for others (and themselves) in the very near future.  In the meantime, Jonason and Webster’s Dirty Dozen scale can give you a quick way to spot the Dark Triad individual in your midst. Rate each item on a 7-point scale as you think it applies to this person. Of course, you can also rate yourself on these qualities to see how you measure up:

Among the college students tested in a later, validational, study Webster and Jonason (2013) report an average of about 36, with most people scoring between 33 and 39, meaning that anyone scoring upwards of 45 would be considered very high on the Dark Triad total.

What does it mean, then, to possess high levels of the Dark Triad qualities? In an investigation of how others perceive the Dark Triad traits, Austrian psychologists John Rauthmann and Gerald Kolar (2010) asked non-university adults ranging from 18 to 75 years of age to judge the perceived “darkness” of each Dark Triad quality.

Of the three, narcissism was judged to be the “brightest.”  People who are high on psychopathy and Machiavellianism can cause you harm but many narcissists only harm themselves.  The argument can even be made that narcissists possess qualities that others find desirable, such as being more physically attractive, charming, conscientious, and achievement-oriented.  Rauthmann and Kolar suggest that perhaps narcissism should be seen as distinct from the other, which they renamed the “Malicious Two.” However, other studies suggest that over time, the initial glow of the narcissist’s bright qualities does tend to fade.  People who interact with narcissists like them less and less the more time they spend with them.

It may be difficult for us to rate ourselves on the Dark Triad traits and to see how our behavior affects those of the people we know. Rauthmann and Kolar found that people rated the consequences for others of these qualities to be worse when committed by others than by oneself.  In other words, we don’t see the harmful results of our own harmful behavior when directed at others.  We are able to see the harm that others inflict by their own hurtful actions.

As we know from other research, psychopathy and narcissism aren’t single, unitary traits. It may not even be possible to the self-ratings of people on psychopathy scales, given the propensity of psychopaths to lie.  Furthermore, there’s more than one kind of narcissist– the grandiose and the vulnerable. The Dirty Dozen scale clearly doesn’t capture these subtleties.

To sum up, the Dirty Dozen scale is – just that— a little dirty.It’s main advantage is that it’s quick and easy to complete. If you sense that someone (or you) might have the Dark Triad traits, consider yourself warned.