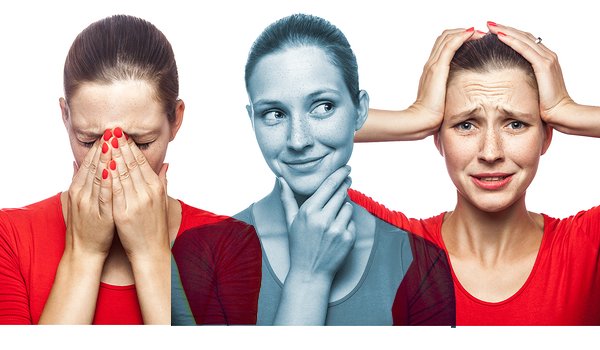 The symptoms of borderline personality disorder include: a recurring pattern of instability in relationships, efforts to avoid abandonment, identity disturbance, impulsivity, emotional instability, and chronic feelings of emptiness, among other symptoms.

Borderline personality disorder occurs in most people by early adulthood. The unstable pattern of interacting with others in this condition has persisted for years and is usually closely related to the person’s self-image and early social interactions. The behavior pattern is present in a variety of settings (e.g., not just at work or home) and often is accompanied by a similar lability (fluctuating back and forth, sometimes in a quick manner) of a person’s emotions and feelings.

People with borderline personality disorder are usually more sensitive than most people to environmental circumstances. The perception of impending separation or rejection, or the loss of external structure, can lead to profound changes in self-image, affect, cognition, and behavior.

They experience intense abandonment fears and inappropriate anger, even when faced with a realistic time-limited separation or when there are unavoidable changes in plans. For instance, a person with this condition may experience sudden despair in reaction to a clinician’s announcing the end of the hour; or panic and fury when someone important to them is just a few minutes late or must cancel an appointment. They may believe that this “abandonment” implies that they are a “bad person.” These abandonment fears are related to an intolerance of being alone and a need to have other people with them. Relationships and the person’s emotions may sometimes be seen by others or characterized as being shallow.

A personality disorder is an enduring pattern of inner experience and behavior that deviates from the norm of the individual’s culture. In order for a personality disorder to be diagnosed, the behavior pattern must be seen in two or more of the following areas: cognition (thinking); affect (feeling); interpersonal functioning; or impulse control.

In personality disorders, this enduring pattern of behavior is inflexible and pervasive across a broad range of personal and social situations. It typically leads to significant distress or impairment in social, work or other areas of functioning. The pattern is stable and of long duration, and its onset can be traced back to early adulthood or adolescence.

A person with this disorder will also often exhibit impulsive behaviors and have a majority of the following symptoms:

Borderline personality disorder is more prevalent in females (75 percent of diagnoses made are in females). It is thought that this disorder affects between 1.6 and 5.9 percent of the general population.

Like most personality disorders, BPD typically will decrease in intensity with age, with many people experiencing few of the most extreme symptoms by the time they are in the 40s or 50s.

Do you have borderline personality disorder?

The perception of impending separation or rejection, or the loss of external structure, can lead to profound changes in self-image, emotion, thinking and behavior. Someone with borderline personality disorder will be very sensitive to things happening around them in their environment. They experience intense abandonment fears and inappropriate anger, even when faced with a realistic separation or when there are unavoidable changes in plans. For instance, becoming very angry with someone for being a few minutes late or having to cancel a lunch date. People with borderline personality disorder may believe that this abandonment implies that they are “bad.” These abandonment fears are related to an intolerance of being alone and a need to have other people with them. Their frantic efforts to avoid abandonment may include impulsive actions such as self-mutilating or suicidal behaviors.

People with BPD may idealize potential caregivers or lovers at the first or second meeting, demand to spend a lot of time together, and share the most intimate details early in a relationship. However, they may switch quickly from idealizing other people to devaluing them, feeling that the other person does not care enough, does not give enough, is not “there” enough. These individuals can empathize with and nurture other people, but only with the expectation that the other person will “be there” in return to meet their own needs on demand. These individuals are prone to sudden and dramatic shifts in their view of others, who may alternately be seen as beneficent supports or as cruelly punitive. Such shifts reflect disillusionment with a caregiver whose nurturing qualities had been idealized or whose rejection or abandonment is expected.

There are sudden and dramatic shifts in self-image, characterized by shifting goals, values and vocational aspirations. There may be sudden changes in opinions and plans about career, sexual identity, values, and types of friends. These individuals may suddenly change from the role of a needy supplicant for help to a righteous avenger of past mistreatment. Although they usually have a self-image that is based on being bad or evil, individuals with borderline personality disorder may at times have feelings that they do not exist at all. Such experiences usually occur in situations in which the individual feels a lack of a meaningful relationship, nurturing, and support. These individuals may show worse performance in unstructured work or school situations.

How is Borderline Personality Disorder Diagnosed?

Personality disorders such as BPD are typically diagnosed by a trained mental health professional, such as a psychologist or psychiatrist. Family physicians and general practitioners are generally not trained or well-equipped to make this type of psychological diagnosis. So while you can initially consult a family physician about this problem, they should refer you to a mental health professional for diagnosis and treatment. There are no laboratory, blood, or genetic tests that are used to diagnose borderline personality disorder.

Many people with this disorder don’t seek out treatment. People with personality disorders, in general, do not often seek out treatment until the disorder starts to significantly interfere or otherwise impact a person’s life. This most often happens when a person’s coping resources are stretched too thin to deal with stress or other life events.

Borderline Personality Disorder on The Mighty