6 Glaring Signs Your Friend Is A Narcissist - Mugsy McCoy 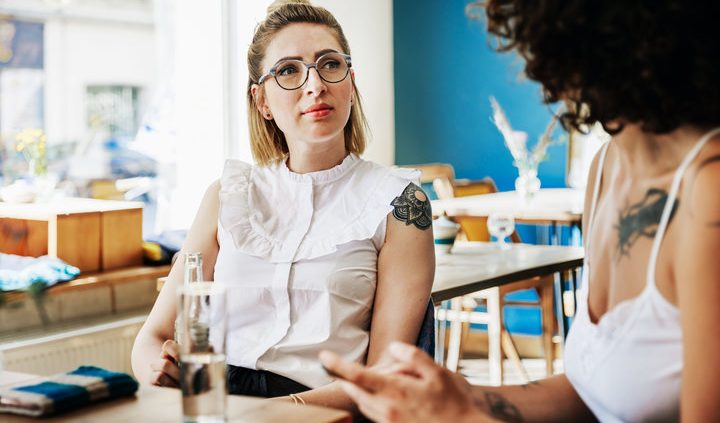 Posted By mmadmin
6 Glaring Signs Your Friend Is A Narcissist

Should you stick with a narcissistic friend? Experts weigh in.
Source: Huffington Post

A quality friendship is all about give and take: You complain about the passive-aggressive emails your boss sends on the weekends, she regales you with tales of her last disheartening Tinder date.

That careful balance could definitely be skewed if you’re friends with a narcissist, however. In that case, the conversations are one-sided, you feel exhausted by the end of your coffee dates and your needs from the friendship go completely unmet.

Of course, not every friend who’s a little into themselves has full-blown narcissistic personality disorder (NPD). Narcissism exists on a spectrum, and no one who’s narcissistic is past redemption.

It’s only when your pal’s narcissistic traits begin to negatively affect your life that you may want to reevaluate the friendship or at least cut back on those all-consuming wine nights. Below, therapists and other experts share signs that your friend is a narcissist.

1. You used to have fun with your friend; now you just feel drained after you hang out.

Say what you will about narcissists, more often than not, they’re a good time. Your friend probably loves to entertain (though it might feel more like holding court), tell colorful stories and buy lavish, over-the-top gifts for those in his or her inner circle. But the shine is often short-lived; once you give them the attention and ego-boost they need, they’ll put you and your friendship on the back burner, said Virginia Gilbert, a Los Angeles-based marriage and family therapist.

“The fun comes to a screeching halt the moment you don’t give them the adulation they crave,” Gilbert said. “Instead of feeling buoyed by their larger-than-life gestures, you begin to feel controlled and exhausted by their constant demands.”

2. They believe that their way of seeing things is the only way.

Narcissists are experts at running other people’s lives. Sure, you could question their unsolicited advice to dump your college sweetheart, but prepare yourself for a heavy helping of disdain the next time you see them.

“Narcs believe, without a doubt, that they know better and therefore other perspectives are irrelevant,” said Melissa S. Cohen, a psychotherapist and relationship coach in New York City. “Initially, it may seem like they’re trying to help, but they’re really trying to manipulate you and convince you that your opinion is wrong. You have to go along to get along or risk the wrath of the narcissist.”

3. They’re super generous — or at least they say they are.

If your narcissist friend volunteers once, get ready to hear about it for the next five months. By their own estimation, any decent thing they do for someone else shoots them up into Mother Teresa realms of altruism.

If this sounds familiar, your friend probably suffers from communal narcissism, a type of narcissism marked by promoting oneself through commitment to others and a supposed ability to listen and connect, said Craig Malkin, a psychologist and author of the book Rethinking Narcissism: The Bad — And Surprising Good — About Feeling Special.

“Communal narcissists believe they’re superhumanly generous or empathic,” he told HuffPost. “In psychological testings, they’re quick to agree with statements like ‘I’m the most helpful person I know’ and ‘I will be well known for the good deeds I have done.’

He added: “Picture the friend who corners you at parties, whispering excitedly about their latest act of altruism and accuses you of being ungrateful if you can’t see they’re most supportive listener you’ve ever met.”

4. They trash-talk your mutual friends.

A narcissist demands your loyalty but betrays the trust of others like it’s nothing, said Cohen. “Don’t tell anyone, but…” they say, before sharing a personal story that’s clearly not theirs to share.

“You might also notice that they are never really happy for other people’s good fortune but seem to enjoy other’s mistakes or failures,” she said. “In general, narcissists aren’t loyal to anyone. Never trust someone who is a gossip. It is only a matter of time before they’ll be talking to everyone else about you.”

5. They feel under attack when you offer them advice.

A narcissist builds a roster of friends for their own gratification; they want people to shine a light on their own self-perceived greatness. If you point out a flaw or hint at criticism instead of indulging them, it’s not likely to go over well, said Meredith Gordon Resnick, a therapist and the author of a series of books on narcissism.

“A friend will ask you for help, and you gladly comply. This is what friends do. If your friend is narcissistic, your act of [giving advice] will eventually be used against you,” she said. ”‘Everyone else likes my ideas except you,’ this person might say. ‘You’re jealous and envious and want me to fail.’”

When it comes to criticism, a narcissist can dish it out but can’t take it, Gordon Resnick said.

“You’ll be blindsided because the accusation from them comes out of nowhere,” she said. “It’s classic projection. The dressing down you receive will seem way out of proportion.”

6. They used to build you up, now they chisel away at your self-esteem.

“They point out your flaws ― often with sarcasm ― and complain that you’re ‘too sensitive’ when you tell them you don’t like being criticized,” Gilbert said. “But every so often they throw you a ‘feel-good’ bone, so you stay in the friendship hoping it’ll be the way it was.”

If they’re a true narcissist, nothing is likely to change, and you’ll be stuck in the same “take, take, take” rut you’ve been in for years.

“Now that they’ve got you hooked, the narcissist controls you by chipping away at your self-esteem so you’ll redouble your efforts to get back in their good graces,” she said.

Do you recognize your friend in a majority of these signs?

Your friendship may be salvageable, but it hinges on them recognizing that your connection should be built on reciprocity and mutual caring.

Malkin suggests phrasing your request for a change in a way that emphasizes how much you care about them.

“Say something like, ‘We’ve been a big part of each others’ lives for as long as I can recall, and I want to keep it that way. When you yell at me, it hurts precisely because I care about you so much,’” he said. “Expressing yourself this way with people who are narcissistic reminds them of your shared connection, reducing their narcissistic tendencies.”

If they aren’t capable of an empathetic response, ask yourself how much you stand to gain from staying friends.

“Ask what you’re really getting from the relationship that outweighs being wounded and humiliated regularly,” Gordon Resnick said. “Anyone can encounter a narcissist. The real work is in recognizing the patterns inside ourselves that keep us returning to situations that hurt our souls.”